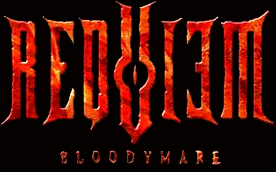 Well, I tried another free to play MMO tonight. It's called Requiem - Bloodymare. What intrigued me about this one is the fact that it's main catch is that it's a horror game. I was thinking about the other horror games that I have played. You know 'those'. The first couple of Resident Evils, just about all the Silent Hill games. The eerie creepy experiences that make you jump and sometimes scream, in a very manly way of course. So, I was expecting to play this one for about 20 minutes at the most, pick up my testicles and not play again due to my girliness when it comes to horror.

My main character is now 13 and I'm still playing it if that's any indication of the scare factor that this one holds.

I'm gonna have to head in a bit of a non-MMO direction for a second here. There are horror movies and there are gore movies. An example of a horror movie is The Exorcism of Emily Rose, that movie scares the poop outta me. On the other hand there are the Freddy and Jason movies. They aren't really that scary because they are off the wall, no way in all levels of hell, that they could happen. Sure they are gory but that isn't scary. The only thing that does is make you crave Italian. However, Emily Rose is supposed to be based off of a true story and there aren't any mask wearing, chainsaw equipped maniacs running around. If you believe in the supernatural it COULD happen. Therefore, logically, if it COULD happen than it COULD happen to you... which scares the piss out of me.

Getting back on track here, Requiem is pretty run of the mill as far as recent MMO's go. You choose between four races, the standard human (Turan), the big gray human like dudes(Bartuk), and the agile looking gray dudes (Kruxena).

You may be thinking to yourself, "Self, he said four races and that's only three!" 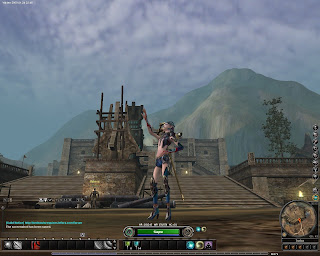 Well, Self, you would be correct. The previously mentioned races all look like they belong in a horror setting, they are tough looking mean Michael mean-men. The fourth race happens to be fairy looking and way out of place. The Xenoa are short, tiny and.... well.... dainty looking.
The latest incarnation of Slaynn looks like he should be the president of the artist formerly known as Prince's fan club. If I wasn't such a cheapskate I would probably spring for the cash shop item to change his name to PurpleRain.
It's just bad. The game play was alright but I could not get over the fact that if they put player housing in the character formerly known as Slaynn would not be able to resist installing lots of track lighting and playing Village People songs while painting his Blue Oyster Club sign in preparation for hanging it over his front door.
Posted by Slaynn at Sunday, January 25, 2009