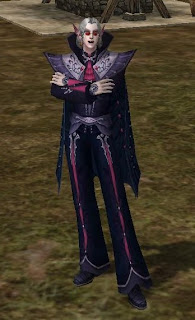 It happened today. The point where you meet one or more people within an MMO and that seals the deal. You will be playing it for a while just for the simple fact that you want to hang out with them.

Judging by all the previous MMOs that I stayed playing for more than a week other players were probably the deciding factor. The kind of people that will play with you until the wee hours of the morning regardless of the fact that you are drunk off your ass and incessantly typing retarded ass jokes (hey, they were funny at the time). That's how I met a good interwebz friend of mine named Zeathen. That night was a little fuzzy but we were on Vent talking all kinds of shit. All I have to say is that pizza guy was one great American that night. I loved him six ways from Sunday. One of those nights of supreme nerdness that will live on forever in the halls of dorkdom. 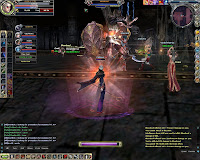 Amazingly I met my new found eFriends in my second group since I started playing. My wife likes to call me a social butterfly, which makes me twitch (not to be confused with being made to wiggle, more on that in a second) but it could be an appropriate label.

For the most part I like my friends to be in my computer. That way when they do something stupid, become annoying etc. I can just turn them off. Something about MMOs brings out the chatter box in me. /shrug 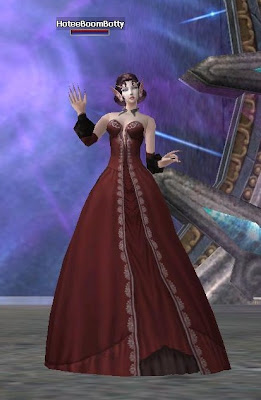 So we were in some place near the human city, Ahkma I think, and just jibber jabbering about whatever came to mind when a female Dark Elf runs by. I have always liked the Victorian look on a woman. The corset top thingy majigger and the big dress just do something for me. I felt the need to just blurt out my idea that Dark Elf females were hot and they make me wiggle. The rest of the night was all about this new expression. I think that is what set it off and really broke the ice with the group.
All in all it was a fun night. I haven't had that sort of social interaction with a group of fellow gamers for a long time.
Regardless of the game play and innovative features a developer includes in whatever MMO if you don't ever make friends it will truly never be fun.
Posted by Slaynn at Monday, January 26, 2009