A little known, to me anyway, promising MMO in development is accepting alpha testers. This one looks to be very cool. Set in a post apocalyptic time, Fallen Earth is shaping up to be one of this years hidden gems. With a classless skill based system and a game world where crafters make 95% of the items it seems to be something that I was looking for in an MMO. See State of the Game. 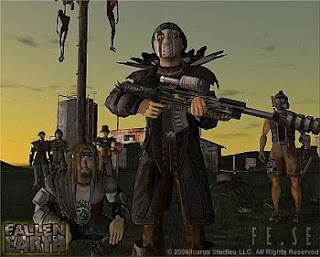 Set in the year 2156 after a plague wiped out most of humanity there are 6 factions battling it out. My personal choice after reading the descriptions here will be to join the Enforcers. Maybe it's my military background or some weird attraction to discipline I feel they would fit me perfectly.

FE is toting itself as an MMOFPS. Just about all the other games that claimed this label were complete and utter poopola. Games like Neocron and Mankind were great in concept but the game play and rampant ganking made baby Jesus cry.

The developers, Icarus Studios, are claiming that the game will have heaping portions of PvE and PvP content. Factions will be able to battle it out and claim towns and possibly zones. The good part about it is these zones will be clearly marked and if you aren't into shooting faces you can steer clear. What I'm getting from this is a Dark Age of Camelot like system that allows you to PvP all you want but if you aren't in the mood you can partake in some mob slaughtering without looking over your shoulder every two seconds.


Release date hasn't been set yet. There are rumors that it will be Q2 2009 but nothing has been confirmed by the devs. Check out the site and read up about it. Vehicles, dynamic clothing (ski masks that are warn can be rolled up or down, etc.) and a huge game world are all coming our way.

Can't wait to tear into some hippy ass lawbreakers. Muahahah!!