After checking out Fallen Earth I stumbled on another similar post apocalyptic MMO in the works called Earthrise. It is along the same lines as Fallen Earth but still separates itself. This one is in the distant future also but is set in the aftermath of a world war. The technology is back in the world but, and it's a big but, a single city government controls almost all of it. They control the only means of cloning and therefore dictate who lives and who dies. 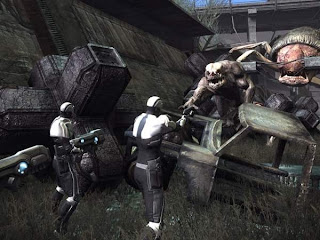 Individuals that disagree with this arrangement are part of an insurgency, the Noir, that is trying to take control of these technologies away from the government, the Cantinoma, and give it to the people. Enter the PvP conflict.

Combat in Earthrise is going to focus more on the RPG aspects than FPS ones like in Fallen Earth. Targeting is going to be via 'soft lock' which requires a lot less twitch gaming to be successful. Soft locking is sort of a loose target lock that will still require you to maintain constant reticle to target contact but it's a little wishy washy on exactly how it will work.

Personally I like the idea of some sort of a lock system better than a Quake game with stats. The community over on the Fallen Earth forums is much more robust and the faction choices there are vastly different. Nevertheless this one looks to be very cool too. The graphics are better and they are just about to head into the beta phase of development so time wise we will more than likely see this one before Fallen Earth.

Head over to the site and sign up. The forums are very active and the community is very hopeful. 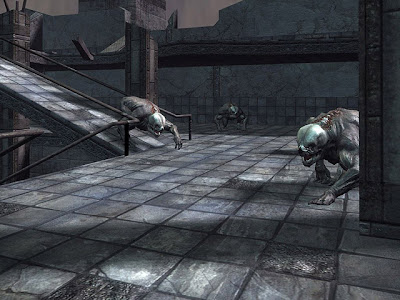