Asheron, are You My Father?

My habits regarding MMOs and gaming in general are somewhat unusual.  They may even be a little self destructive in terms of whether or not I end up enjoying a game enough to stick with it.  This may take a bit to explain so here goes.

In order to spin this tale I need to take you guys back to 1979 when a little Slaynn was thrust upon this world....

OK, maybe not that far.  Let's try that again.

In order to spin this tale I need to take you guys back to 1999 when a somewhat awkward 20 year old Slaynn discovered the joys of Asheron's Call.  The original gem that was, I think, overshadowed by a game that some people may have heard of that goes by the name of Everquest.  Asheron's Call was an unforgiving experience that taught me how to play an MMO.  It forged the foundation of my play methods that I still use to this day whether I like them or not. 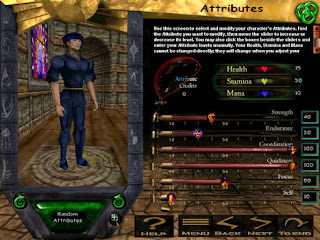 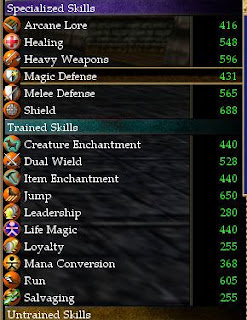 Progression in AC was based off of spending your experience points in order to advance.  This was the case for your general stats and also your skills.  The more you improved these attributes the cost to further improve them increased exponentially.  Since your skills were linked to certain stats they would raise indirectly so it quickly became VERY expensive to get that next point in strength, dexterity, endurance and whatever other base stats there were.

When AC was in its infancy in order to maximize your character's combat potential he had to be born with as little endurance as possible.  This meant that without outside help you would be fighting the weakest creatures for a very long time and die consistently while doing so due to having a minuscule amount of health.  It took hours upon hours of grinding things that were far too low level but eventually things would even out.  Your character would start to be able to take on mobs that were on an even playing field.

Ahhhhh, the light at the end of the tunnel could be seen.

After even more time invested your sacrifice would finally pay off.  That handicap that you took on would shine.  Your ugly caterpillar would create his cocoon and a pretty little butterfly of whirling mob death and destruction would emerge.  But only after weeks of being excruciatingly under-powered.  By gimping yourself in the beginning you effectively raised the skill ceiling by a lot.

I learned that in MMO gaming painful beginnings would lead to amazing things in the end.  If you stuck with them.  With the homogenization of today's games this is not something that always happens and I know that.  But for some odd reason I always want to take on the role of the underdog in hopes that I will find his butterfly state. 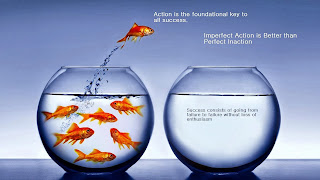 How does this translate to the Slaynn of 2013?

Well, I will do some research when I decide to start an MMO to find the least played class.  I do this for many reasons and I plan on writing about them later but the least played class has to have the most potential right?  I mean, many people probably have tried to play it but quit because they don't have the intestinal fortitude to push through and get to the good parts.  That has to be the case.  Has to be.  Developers wouldn't have a weak path built into their virtual worlds without that light at the end of the tunnel.  Would they?  That is not a question that can be answered simply and is another post in and of itself but damnit, I have the fortitude.  I have the drive to get to the end.

Queue the Eye of the Tiger montage here.

All of this leads to me often becoming one of the masses that does not have the guts to push through the suck.  I never power through everything in order to come out of the other end having the gaming time of my life.  Nope.  All of the motivation, dedication and drive leaves me after a few play sessions and the most probable course of action is to quit and move on to something else.  Gamer A.D.D. at its finest.