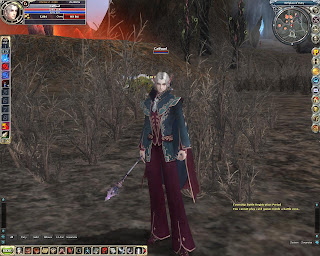 So, I fired Rohan Online up and decided to create a mage with aspirations to eventually go down the warlock path.

Warlock just sounds awesome. Slaynn the mighty WARLOCK of dOOm!1!!one!1!!eleventy!!!!111 MuahAHhAhAhAH!!!1!!!
I ended up using Cathaal for his name. I suppose that will do. Correction to the above, Cathaal the WARLOCK of d00m!1!!1!
Anywho, the noob area is pretty bland but effective. With some of these free games the translation is pretty ghetto fabulous and you walk away from some of the quests thinking to yourself, "WTF am I supposed to do?." Not so with Rohan. The translation is pretty good. It's done well enough to get the reader involved in the quest lines and story.

The clicky crap still irks me, however. Clicking to do everything is just so limiting and frustrating. The play style is a lot like Diablo except for the fact that the camera doesn't follow your character so you can click on a mob, run away to get some distance, hit your attack skills and your character will turn around and engage the target without the screen moving. This makes you have to manually move the camera so you can see whats going on.

Overall, so far, it's a pretty good game. I would have to give my first impression rating a 6 out of 10. Enough to keep me interested for a while longer but nothing to write home about.
Posted by Slaynn at Monday, January 12, 2009