Yes, contrary to the attempts of armies of ninja zombies, I am still alive. Out of the list of possible zombies I would have to say that ninja zombies are the worst. They own your face with ninja moves then chomp on it like a little elementary school kid eating cafeteria tater tots. OM NOM NOM!

So in between defending myself from the undead trained in martial arts I have been playing several MMO's including Aion, Champions Online and Allods Online. Stealing the term coined by the folks over at Multiplaying I am going to give those games a 'Half Assed Review'. Just to put it out there, I never go into a game planning on not liking it. I am not going to go to the store and drop $35 - $50 on a product with the expectation of giving it to the dog as a chew toy. Without further delay here we go... 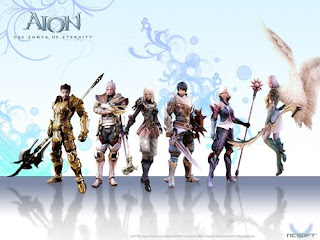 Aion:
To be truthful, I bought this game on an impulse. I was bored and was looking for an MMO that could hold my attention and inject a little gamer joy into the normal day of combating the walking dead. After surfing over to Direct2Drive and purchasing a digital copy of the game, downloading, installing, updating and logging on I was really surprised at how beautiful this game is. Going off of what I have learned in the past I wanted to have a character that was pretty decent at PvP. After years of playing a tank in MMO's I decided to go with one of the lesser played DPS classes. It only took minutes of research to find out that Ranger was the class for me.

Character creation was pretty good. While all characters are human, there are several hair styles and face choices. The one thing that seperated characters from one another were the sizes. The ability to have your character size vary from a leprachaun to a behemoth of a man (or woman) was unique to most MMO's out today.

I leveled my Ranger to around 19 and discovered that the game was OK. It wasn't good and it wasn't bad. If I had to put my finger on it I would say that the game was very vanilla. You get your quests, you do your quests and that's it. Killing mobs for quests while occasionally flying around. Unfortunately Aion didn't keep my attention long enough to get into the Abyss and get my PvP on. Maybe I didn't give it enough time but there wasn't enough depth for it to grab me and pull me in. Character development was very mundane. My Ranger was the same as all the other Rangers running around.

Depending on what is going on at work tomorrow I will continue my slew of half assed reviews.